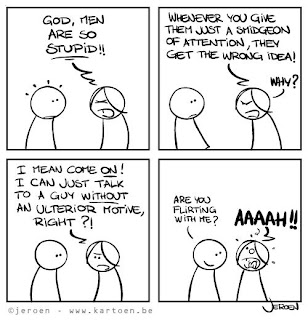 Are men as primitive as most women think? New research has shown otherwise. According to an online article form the journal Nature this may not be so. Research has shown that the Y chromosome – the thing that makes a man male – is evolving far faster than the rest of the human genetic code.
According to a study comparing the Y chromosomes from humans and chimpanzees, our nearest living relatives, there is about a 30 per cent difference between the two which began some 6 million years ago, which is fairly recent when evolution is concerned.
This makes the Y chromosome the most rapidly evolving of all human chromosomes as stated by the articles co-author, Dr David Page who is also the director of the prestigious Whitehead Institute in Cambridge and a professor of Biology at MIT.
So what exactly would be the reason for such a rapid evolution? According to Page, there are two possible reasons, the first being that since the Y chromosome does not belong to a pair, when there is a mutation, there is no matching chromosome to recombine and essentially cover up the change. This is not so for women because they have 2 – X chromosomes and X chromosomes do not have this situation.
Another reason has to do with mating although this was suggested after careful observation of female chimps on heat. Female chimps on heat tend to mate more frequently and with many partners. This places an evolutionary pressure on the male to produce the most and best sperm to propagate his genes.
There is no apparent reason for this evolution in the male specie as yet but research is going on to better understand the Y chromosome of the male specie.