Sad Ending to Rare Giant of the Deep 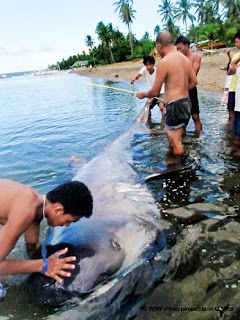 A big catch by mackerel fishermen off the city of Donsol, Philippines yet, a terrible end to another great of the ocean. One we might never get to fully appreciate before there is none left.
Pictured here is a rare mega-mouth shark. According to the WWF-Philippines, this is only the 41st one to be recorded since its discovery in 1976 off Oahu, Hawaii. Updated records as of July 9th, 2009 showed a total of 47 megamouth sharks either sighted or caught. http://en.wikipedia.org/wiki/List_of_megamouth_shark_specimens_and_sightings
This is a creature so rare it has not been listed as an endangered species, however as simply ‘data deficient’ by the International Union for Conservation of Nature.
This 4 meter long, 500 kilogram beast met its fate in the fishing nets of local fishermen in March 2009. Whats interesting to note about the location where this beautiful but rare creature was caught is that it is part of the ‘Coral Triangle’ which spans Indonesia, Mayalsia, the Philippines, Papua New Guinea, Solomon Island and East Timor, this is said to be the home of the richest concentration of marine life in the world. 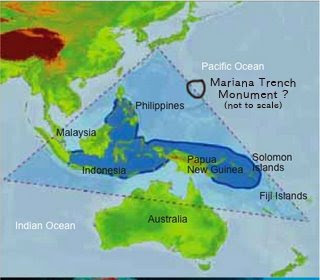 Sadly, the area this Coral Triangle spans covers some of the most densely populated and least developed places in the world today. The problem now is, how do we educate these people about the importance of these disappearing creatures? and for local fishermen like these, how do we compensate for the loss of their catch?……

2 Responses to Sad Ending to Rare Giant of the Deep