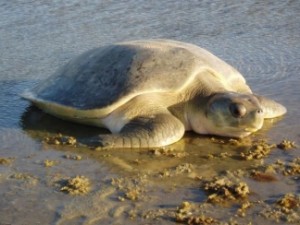 Flatback sea turtles (Natator depressus) get their name from their flat carapace or shell, which is unlike the curved shell of other turtle species. The carapace on flatbacks are greyish-green in color with the outer margins distinctly upturned. Other distinguishable features include a single pair of prefrontal scales at teh front of the head and four pairs of coastal scutes on the carapace.

Flatback hatchlings are proportionally larger than other species, a trait which is believed in aiding hatchlings evade predators

Flatbacks have the smallest distribution of all sea turtle species and only breeds and nests in Australia although their distribution range can span tot eh southern part of Indonesia and Papua New Guinea. Flatbacks are also small in size, reaching up to 1 m in length and weighing up to 90 kg.

Current status can not be classified internationally because of their restricted range, however, in Australia, flatback turtles are listed as Vulnerable under the Australian Commonwealth’s Endangered Species Protection Act. The main threats to this species include;

Flatbacks are also threatened by predation by other animals including foxes, feral dogs and pigs. Despite their limited range and non-migratory behaviour, this species remains the least studied sea turtle species.