Could the presence of giant isopods be an indication of whats below the surface?

When stories of a fisherman in Florida, USA catching a goblin shark made headlines all over the world, something else caught the attention of inquisitive deep sea biologists as they questioned why there were so many giant isopods in the same net? Giant isopods are insect like creatures that are scavengers only found in large numbers around a food source. This was also a possible explanation to why there are so many of these deep sea scavengers in the same place.

Dependind on where you are in the world, sunlight can not go beyond 200 m in the water column, so beyond this point, there is no photosynthesis. Animals that live below this depth depend mainly on surface detritus which is made up of dead plankton and fecal pellets from zooplankton (marine snow) or through symbiotic relationships with chemosynthetic bacteria for nutrition. Once in a while, a large food source like a tree trunk or the carcas of a dead animal from the surface finds its way to the ocean floor providing a feast for scavenging animals.

So what kind of food source would we have here to attract a goblin shark and such a high density of giant isopods. One thing for sure is that whatever it is, I am willing to bet my money that it is not woodfall.

Interestingly, on the same day (May 7th 2014) that stories of the goblin shark made headlines, PLOS also published an article by Nick Higgs and others on the role of large food falls on deep sea communities. In this paper, the authors looked at the remains of one whale shark and three rays of the order elasmobranchs in off the coast of Angola. Elasmobranchs have cartilaginous bones, lack a swim bladder and depend on oil in their livers for buoyancy, in simple terms, elasmobranchs are sharks. 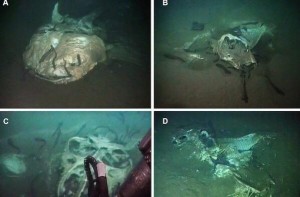 image of a whale shark (top left) and three rays on the sea floor off the coast of Angola (Higgs, 2014)

One thing the data presented in this paper failed to show was the presence of any deep sea sharks or scavengers, in particular, the giant isopods. So why would the presence of giant isopods indicate a possible food source that is not woodfall when none of these scavengers are reported here? One possible esplanation Nicholas Higgs and his team proposed was that decomposing elasmobranch flesh contains high concentrations of ammonia that comes from their physiological mechanisms used in buoyancy control.  This and other unclassificed chemicals that are found in rotting elasmobranch flesh (necromones) have been proven to strongly deter shark scavwenging and invoke alarming response, even among different species of elasmobranchs.

Going back to the giant isopods in Florida, it is only fair to conclude that whatever food source is at the bottom of the ocean that is attracting these scavengers, is quite possibly the carcas of a dead whale. That being said, it will be very interesting to send probes to scout the ocean floor to find this carcas because apart from whale falls that have been created in the name of science, a natural whale fall is very rare. Statistics have shown that in the last 50 years, only 9 natural whale falls have been documented. If this is indeed a whale fall, then vital information on the decomposition rate of the particular species, the types of communities hosted over the duration of decomposotion and many other information can be collected.