Giant snakes have the ability to find their way home

Migrating animals have always impressed us with their ability to navigate between breeding and foraging grounds. Cetaceans make long journeys to the warm tropical waters to breed and then migrate back to the cold polar waters to feed, birds make long seasonal migrations following food sources and weather patterns, eels and salmon journey between the sea and fresh water at different life stages and turtles make very long journeys across ocean basins to feed before returning to their nesting beaches where they breed again, but whoever’s heard of migrating snakes?

An interesting study recently published about  Burmease pythons  (Python bivittatus) in South Florida, USA might just have provided the first ever evidence that snakes (and I mean giant snakes) are capable of finding their way back to their homes if relocated. Although other snake species have demonstrated sophisticated spatial memory, the ability of a snake to find its way back to its home has never been seen before.

This particular study involed 12 radiotagged animals; 6 were released where they were originally captured while another 6 were transported by road to locations ranging from 21-36 km from their point of capture and released. Data from radio tags showed that 5 of the 6 animals released had actually found their ways back to  within 5 km of their original capture point. 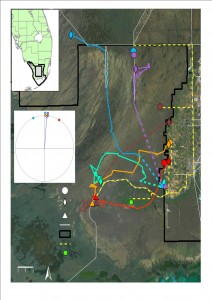 These results show the first ever documented evidence that giant snakes might just be capable of finding their ways home if relocated. An animals ability to return home after translocation involves two senses: a map sense (determination of a position in relation to a goal) and a compass sense (access to reliable compass to maintain orientation towards the goal). This study concludes that these animals were able to use environmental cues at their release site to determine their position in relation to their goal thus making their ways home. These cues may include olfactory and magnetic cues that change predictable through space (Rodda G et.al., 1992). The use of magnetic, celestial, olfactory or polarized light could have also provided reliable compass sense for the animals (Southwood and Avens, 2009).