Missing in the line of duty: Mysterious case of 5 missing scientists in Papua New Guinea

A little over a year ago, five Papua New Guinean scientists together with a boat operator and one extra person perished in the seas of West New Britain. These five were members of the Papua New Guinea (PNG) Institute of Medical Research (PNGIMR) who were on a trip to conduct Malaria Research in the island of Bali.

To this day, no one knows what happened to them, they simply vanished. Search and rescue parties were sent out but a week later called and the case became a police matter after rumours surfaced that these five scientists were taken hostage by pirates. Any progress on the matter has not been reported and the general public (at least the ones concerned) still remain in suspense over what happened.

In the weeks that followed, fishermen from Manus found a partially buried body and after images of the body were broadcasted by the media it was confirmed to be that of the skipper of the dingy ferrying the five scientists. A little after that, the dingy itself was found floating in the waters of East Sepik. (More…)

Having had no luck at all, the last resort was to put up a US$10,000 reward for information leading to the whereabouts of the missing scientists. What transpired after this is still a mystery to everyone in PNG. 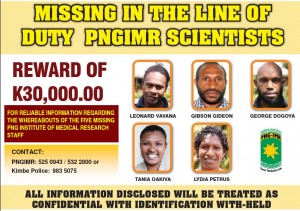 What happened to these people? If they were held hostage, why has there been no demands/ransoms? If investigations into the disappearance of these people continued, why is there no reports put out to the public? Why is everyone so quiet about this?

It is really terrifying to see that Papua New Guineans do not care what happened to these people missing at sea. The PNGIMR and relevant authorities have become so silent on the matter, not one report or public statement has been made on the efforts put into searching for the missing people or what their investigations had revealed.

Family members of the missing people are still in doubt and do not have closure on the matter.

This entry was posted in People, PNG and tagged Missing scientists, PNGIMR. Bookmark the permalink.