Alvin and the Garden of Eden

The discovery of deep-sea dwelling extremeophiles is a fascinating tale to share. One of the earliest discoveries in this field was the discovery of Giant Tubeworms, Riftia pachyptila by the Woods Hole Oceanographic Institution, using their deep-sea diving submersible, Alvin. Here we relieve the history of this momentous discovery. 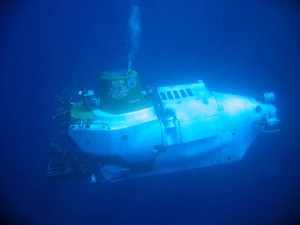 Alvin on one of its dives. Photo courtesy of Mark Spear, Woods Hole Oceanographic Institution

In 1977, a small team of marine biologists in the Pacific Ocean made a discovery that would change the world forever. Oceanography could not be any less like the cruise industry and conditions inside the underwater pod, Alvin were uncomfortable and cramped. But suddenly the sight of a previously unknown life form made it look like the greatest place on earth. Manning the pod that day were scientists Jack Corliss and Kathy Crane who were intending to navigate to the deepest part of this part of the ocean to see if they could answer some basic questions about the ocean’s chemical make-up and issues surrounding its temperature. They navigated the mother ship to an are of the Galapagos Rift in the eastern Pacific. Crane stayed onboard the ship, while Corliss, an Oregon State University geologist, climbed into the Alvin and began his descent into the deep. Crane, a graduate of the Scripps Institute of Iceanography was searching for ‘hydrothermal vents‘, underwater fissures in the earths crust that emit geothermally heated water.

The team had spotted something anomalous that looked like clam shells on the imaging equipment, but thought little of it, joking that the shells had probably been thrown overboard by the Navy after a clam feast.  But as Corliss got closer, he peered through the gloom to find that the clams were not only alive, but huge in size. Some were well over a foot long. Other life forms were living nearby, such as mussels and anemones, in an environment so inhospitable that no scientist had even considered it possible for life to exist. Corliss and his colleagues were amazed and delicately collected samples of all life forms they could see for further analysis. They named the area “The Garden of Eden“. 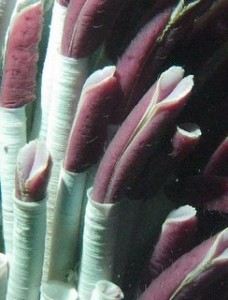 Corliss noticed, as he was collecting samples, a sea of worm-like creatures, white in color but with beautiful red-tipped plumes. They moved about in the water like plants, swaying and undulating, intrigued by the life-form, he took  a sample. When the alvin surfaced, the team contacted Woods Hole to show biologists there what they had found. It was only then that they realized that they had come across a previously unknown life-form in the giant worms, one that was capable of surviving on pure hydrogen sulfide.

How on Earth do they Survive on Hydrogen Sulfide?

The team was delighted to have made such an amazing discovery and biologists at the Institute and all over the world began experimenting on the worms to try and find out how they managed to live in such a hostile environment that was totally devoid of light. The answer is that these tube-worms that can grow up to seven feet long live by a process called ‘chemosynthesis‘, which is the process of using bacteria to synthesize hydrogen sulfide, creating carbon compounds that the worms feed on. The bacteria that live inside the worms account for half the worms body weight. The worms have no digestive tract but use their red feather-like plumes to gather hydrogen sulfide from the geothermally heated water being emitted from the hydrothermal vents. Some oxygen is used in their respiration process, this they find dissolved in the water  which was filtered down from the surface of the sea where light aids the production of oxygen.

The discovery of life in such an extreme environment led to a new frontier in biological science and soon the Galapagos Rift was swarming with big name scientific institutions, all keen to be at the forefront of the new research area. Now the study of extremeophiles  is popular amongst students and research scientists alike, but it all started with the Alvin and the Garden of Eden.

One Response to Alvin and the Garden of Eden