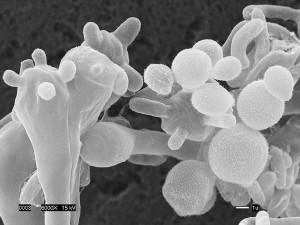 Studies have shown a new strain of the deadly Cryptococcus gattii fungi thriving in the United States (New, Deadly Cryptococcus Gattii Fungus Found in U.S.). Although this is not the first time this air-bourne species has been found in North America , the worrying thing is that unlike common fungal infections that usually strike people with weakened immune systems, this strain is affecting healthy people and has been shown to be spreading geographically. Luckily, fungal infections, unlike viral infections, can not be passed from person to person.