Ask any biologist why they chose biology and the 2 most common answers you’d get would be because they love animals and they love being out doors (although not usually in that order). Coming to think of it, the decision to be a biologist was not an over night decision but one that a person would have spent quite a considerable amount time thinking over so by the time that person finishes high school and is making the transition into college, he/she would already have known some basics about the kind of biology he/she was interested in studying. I had to open this post like this to make you see the stupidity in a question a student asked some 2 months ago.

In one of the many night walks to Carrot Island organised by Duke Marine Labs famous Dr. Dan, my good friend Andrew Thaler and I were ferrying a group of freshmen students across the Beaufort channel when one of them asked;

I always thought they were bits of seaweed that got broken off and carried away by currents.” 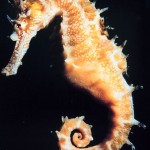 That question, to this day remains one of the dumbest questions I have ever been asked. If the person who asked that question is reading this right now, here is your answer buddy.

Sea horses are real. They are actually a kind of fish from the genus Hippocampus. The name hippocampus hails from the Greek language, ‘hippo’ meaning horse and ‘campus’ for sea monster. They are mainly found in shallow tropical and temperate waters throughout the world and prefer to live in sheltered areas like seagrass beds, coral reefs and mangroves. They turn on their bright colors when in new environments or during social moments.

One of their most interesting traits is that male seahorses are the are the ones that give birth. Yes, you read that one correctly and it is no mistake. Before mating there is a period of courtship that many scientists believe synchronizes them so the male can catch the eggs when the female releases them.

Seahorses can mate for up to 8 hours during which the male pumps water through the egg pouch on its trunk to show its emptiness. When the female is ready, she deposits her eggs into the males egg pouch where he will fertilize them and carry them around with him until the young are ready to be born.

4 Responses to Are seahorses REAL?