The deep can not be home for everyone

Send a surface mammal diving to the depths of the ocean and after a few meters it starts feeling the effects of the weight of the water and atmosphere acting on it. Make it dive down a little further and it starts changing shape until eventually  it implodes because its internal organs have been crushed. Same thing happens when animals from the ocean floor are brought to the surface. Although most do not burst open, they show clear signs of suffering from changes in pressure and eventually die when their internal organs burst.

So why is it that animals from the surface like sperm whales and elephant seals (not to mention leather back turtles, although I have only heard stories) are capable of diving to extreme depths? To combat the effects of pressure at such depths, animals that dive to depths of more than a thousand meters have the ability to collapse their lungs and rib cage squeezing all the air out making the dive more comfortable.

To go without air for a long time is in itself very dangerous. Professional depth divers who compete on how deep a diver can go on a single breath have a period just before each dive when the diver takes very short breaths and tries to exhale as much carbon dioxide from their blood as they can. This helps enrich their blood with oxygen and helps sustain them for the duration of the dive.  Deep diving mammals also have a similar exercise, staying on the surface for up to 10 minutes (sometimes longer) after each dive to remove excess carbon dioxide from their systems. Interestingly enough, deep diving mammals also have high levels of oxygen binding hemoglobin molecules in their blood and a similar molecule called myoglobin in their muscles to help them retain as much oxygen as they can. 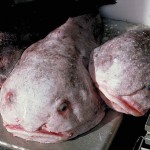 Now what about the animals that live on the ocean floor? We know there are shrimp-like creatures called amphiphods, sea cucumbers, nematodes and other worms and bacteria that thrive at these depths, even fish can be found as deep as 8730 mbsl, (meters below sea level) just a few thousand meters shy of the deepest parts of the ocean. To survive in these harsh conditions, these animals have evolved some rather unique traits. For instance, most of these benthic dwellers tend to have more flexible cell membranes, replacing saturated fates with unsaturated ones and they use a compound called trimethylamine oxide to enable protein bending so they do not take on some weird shape.

These adaptations helped them to survive in the deep sea but would be useless if they were brought to the surface. At the surface, most of these animals internal organs expand because the pressure around them is not enough to maintain their shape. Eventually the organs burst and the body collapses resulting in death to the animal. Good examples of these can be seen in fish whose air bladders have burst after pressure changes.

One Response to The deep can not be home for everyone