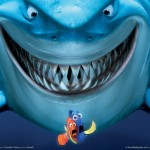 Remember Bruce, the Great white shark with that good old Australian accent in Andrew Stanton’s 2003 movie Finding Nemo? Poor guy never knew his father and that was the first thing to come to mind when going through an article by Nature News in which scientists working in the Mediterranean were able to use mitochondrial DNA (DNA that is passed to offspring from mother and encodes proteins for cells energy factory) from four sharks caught in fishing nets; 2 from Turkey, 1 from Tunisia and another from Sicily to study their population structure.

According to marine biologist Lesslie Noble of the University of Aberdeen, UK, Great Whites (Carcharodon carcharias) are known to travel long distances and like Salmon, the young always come back to the same place they were born in, however sightings of Great Whites in the Mediterranean are rare and samples are even rarer.

The fact that this group originated around 450,000 years ago could be explained by the fact that since these animals migrate over long distances, they must have accidently swam into the Agulhas current and traveled down the east coast of Africa and then got swept up the west coast of Africa eventually ending up in the Mediterranean where they now call home.

Of course this find was based on DNA collected from only four sharks and they are trying to increase their sample size to 50 to get a better picture. Although increasing their sample size could alter the outcome, they are happy to note that at least a fraction of the sharks in the Mediterranean are Australian in Origin.

One Response to Mediterranean great white sharks came from Australia