I lost 8 kilograms in 4 weeks because I do not like spicy food and by spicy food I mean having chilli in my meals. Okay, there have been times when I have had half a chilli or very little of it in my food, either because I was at a friends, I was very, very hungry or just wanted to clear a very bad cold. India is a totally different story, there is chilli in everything; omelets, KFC, Dominoe’s even in popcorn and since I do not like chillie, I stick to Chinese fried rice or what other combination they have here that is the least bit close to fried rice with no chilli. 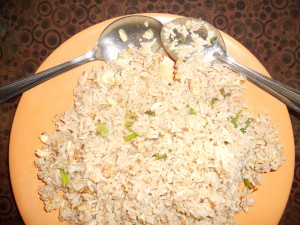 That was until Saturday at noon. I went to the same place as always and ordered myself a plate of their egg fried rice. It’s been 4 weeks of eating the same thing and I could feel my body refuse to accept it but I had no option but to eat something. When I had finished, I sat down for sometime to let the food settle before heading out and then noticed this unfamiliar brownish black piece on my tongue. I picked it and had a closer look and decided to throw it away and abandon the thought of the possibility that this was not something I wanted in my food.

A few minutes later I was back in my room surfing the net when I could not help but notice something in my teeth. This time I used a pipette tip to pick it and guess what I found? I got from my teeth, after eating fried rice, I dead roach. Half of its boby was missing but I am pretty sure the half that was missing was the part I found earlier. I took a closer look and sure enough it was a roach. It had most of its head in place and a good chunk of its body missing but it sure was a roach.

Fried rice or egg fried rice at the place I usually eat is what I have been living on for the last 4 weeks. Coming to think of it, I have had 120 plates of fried rice since I moved here to Goa (no wonder I lost 8 kilos) but I think I am going to look for something else or go hungry for the remaining 4 weeks here.