Half way there and what better way to celebrate than to have the birthday of one of the participants at the end of the week.  Our Egyptian comrade, Suzan El-Gharapawy will be turning 27 this Friday. On behalf of the TAP-MAR participants of 2010, I wish Suzan a very happy birthday. 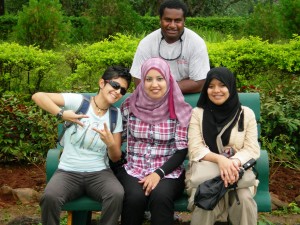 There were four of us at the Start of the program but that number has changed to three after Wahiebah had to pull out last weekend to make preparations for her baby that would be arriving soon. The intended two weeks lecture series on different research projects undertaken by the National Institute of Oceanography, NIO since its establishment in 1965 is over and we are now into the project phase where each participant would work on a project under guidance of a scientist at NIO.

Of the three left, Schery’s research includes using locally collected mollusc’s as bio-markers to measure pollution in the local estuaries of which she will be doing a guest post here while Suzan is currently working on some geology experiments. I have yet to start my project but will be doing soon. I am waiting on Suzan to finish her geology work before we start because we will be using the same machines. I would be working on some sediment analysis and core sample analysis.

One Response to TAP-MAR week 4