Case of the Mysterious Gastropod

The scaly footed gastropod, Crysomallon squamiferum is proving to be as ellusive as ever. My former boss, Prof. Cindy Lee Van Dover has a replica of it in her office at the Duke University Marine Lab and I really wanted to see one so when I found out that I was going to be in India’s National Institute of Oceanography (NIO) for 2 months, my first thoughts were that this would be my ultimate opportunity to see one. 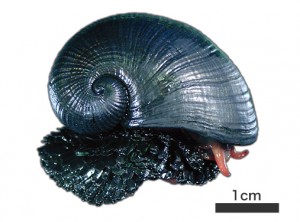 This animal is about 4 cm long and has scales on its foot that are made of ‘pyrite’ or fools gold as early miners often referred to. No one has been able to explain how the pyrite scales are developed or what they are used for although some suggest the scales are formed from dissolved minerals that escape from vents and that the scales help protect this animal from predatory snails that use darts of venom to stun their prey.

Much to my disappointment, it has been a month now since I arrived here and no one here seems to know what the scaly footed gastropod is and I have not seen one yet. This is quite funny when you consider the fact that this gastropod is only found in the Indian Ocean and and at the Kairei hydrothermal vent fields near the Rodringuez Triple Junction in the central Indian Ocean, a site pretty well studied by scientists at NIO.

I have gone through their inventory, repositories and even logs and pictures of some of their cruises but have not come across any documentation of this animal. Even the people who work here do not know this animal. I am still hunting, hopefully one of these days I will get to see one. We are also setting out next Tuesday so hopefully I can get my first glance on a live specimen.

One Response to Case of the Mysterious Gastropod